While these steps will help you install and play around with Windows Server 2012, they also let you play around with virtualization which is a topic of growing importance for any certifications.

You can expect to see Windows 8 go live later this year, probably in October. Windows Server 2012 will probably be released within three months of Windows 8.

You can get a free copy of VirtualBox here: https://www.virtualbox.org/wiki/Downloads.

After downloading it, browse to where you saved it, and double-click it to start the installation. You can just accept the defaults by clicking Next through each screen.

You can download the Windows Server 2012 beta here: http://technet.microsoft.com/en-us/evalcenter/hh670538.aspx. You’ll have the choice of downloading the 64-bit ISO which is a DVD image, or a virtual hard disk (VHD) image. The 64-bit VHD image will run as a virtual system on a Windows Server 2008 R2 system using Hyper-V but it won’t run on Windows Virtual PC.

However, if you download the ISO DVD image, you can use it to install the operating system on Virtual Box running within Windows 7. It’s a 3.3 GB file so it may take a while depending on the speed of your connection.

While this article is focused on Windows Server 2012, you can also use the steps to download and install the Windows 8 Consumer Preview available here: http://windows.microsoft.com/en-us/windows-8/download

Start VirtualBox by clicking Start, All Programs, Oracle VM VirtualBox, and selecting Oracle VM VirtualBox. During the install, you’ll be prompted several times to install device software. This software is needed for various virtual devices so should be installed. These are signed and the Publisher is identified as Oracle Corporation. When the install completes, click Finish. VirtualBox will then start.

You can use the following steps to create a virtual machine (VM) used for Windows Server 2012.

After the VM is created, Virtual Box will look similar to the following graphic. In the figure, I have both the Windows 8 Consumer Preview and Windows Server 2012 (previously called Windows Server 8) installed. 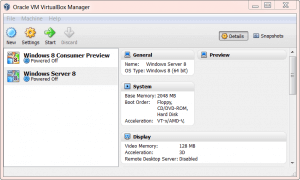 It’s worthwhile stating the obvious here. At this point, this VM is empty. Even though it’s named Windows Server 2012, it doesn’t have Windows Server 2012 installed yet. This is similar to you creating a file in Word and naming it “My Plan for Success”. Just naming the file doesn’t add the contents.

Attach the ISO to the VM

If you were installing this on a new computer, you’d put the DVD into the drive and boot to the DVD. You simulate this by attaching the ISO image to the virtual CD/DVD drive. The following steps show this process. 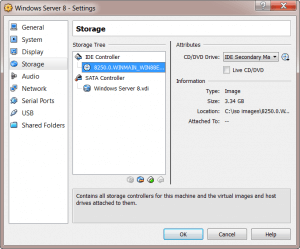 At this point, you should have the following:

You can use the following steps to install Windows Server 2012.

To log in, press the host key plus the Delete key to simulate the CTRL + ALT + DELETE key combination. The host key is the right-CTRL key by default.

Navigation and Shutting Down

The Windows Key (normally located between CTRL and ALT on the left of the spacebar is an important key for navigation and you can use it to toggle between views.

Additionally, there are many different Windows key combinations. One that you’ll want to remember to shut down your system is Windows + i. This will bring up a display similar to the following graphic and you can select the power button to reboot or power down your system. 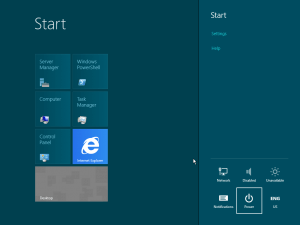