Principle #7 in Jack Canfield’s book “The Success Principles: How to Get from Where You Are to Where You Want to Be” is “Unleash the Power of Goal-Setting.” If you’re seeking success in any endeavor, a good start is to identify the goal. 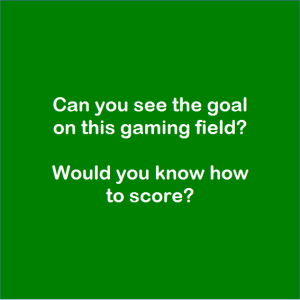 running up and down the field and never score.”

Principle #7 is “Unleash the Power of Goal-Setting”

There’s a large park near my home and on many weekends, teams of children are out there playing soccer. In the early morning, adults prep the fields and place the goals in the appropriate places.

Can you imagine these teams playing soccer without goals?

Sounds crazy doesn’t it? Without goals, teams simply wouldn’t know how to score. The players will still expend a lot of energy running up and down the field, but the overall objective simple isn’t clear.

In contrast, the players have a clear idea of their direction and what they need to do when the goals are in place. 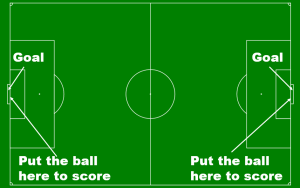 That’s true for everyone.

With goals, it’s easy for you to move in the right direction to achieve them.

Without goals, you may still expend a lot of energy, but when the game is done, you may find that you aren’t where you expected to be.

While in the Navy, trainers taught me about effective goal-setting using the SMART model:

This recent post talks more about SMART goals and what they include: Have You Dropped Your New Year’s Resolution Yet?

Learning about something and using it are completely different things. I admit that I didn’t put that knowledge into action when I first learned it. Instead, I’d do New Year’s resolutions that I typically forgot by the time I was buying Valentine’s day flowers for my wife.

I’ve since learned the value of goal-setting. Goals provide me with several benefits including clarity and direction.

First and foremost, if you take the time to write out an effective goal, it provides clarity.

Admittedly, it takes time to think about what you want, and write it down in a clear manner. However, the clarity this provides you is well worth the effort.

For example, compare the differences between these New Year’s resolutions and effective goals.

Each one of the New Year’s resolutions are vague while the effective goals are clear.

With a clear goal in mind, it makes it much easier to start pursuing it. Many people simply fail to start because they can’t decide on a goal.

As an example, here’s an email I recently received:

Here’s a shortened version of my three step response:

I know that if he decides what he wants and sets a goal to get it, starting becomes much easier.

As with many of these types of emails that come into my inbox, I didn’t get a response. It’s unclear to me if he ever did decide on a cert, if he set a goal, or even started. It’s entirely possible that he’ll email someone else a similar question in about a year.

In contrast, another person emailed me a similar question and I gave a similar response. We exchanged a couple of emails and he ultimately decided on a goal. About 45 days after the first email, he let me know he passed the Security+ exam the first time he took it.

Similarly, I wrote in the book “You Can Do Anything: Three Simple Steps to Success for Graduates” how  goals helped students achieve the same certification. Specifically, the number of students taking and passing the exam increased from 10 percent to 90 percent after I added an in-class process to create written goals to take the exam.

Unleash the Power of Goal-Setting Summary

Goal-setting works. It works for soccer players. It’ll work for you. Take the time to set a goal and you’ll find that when you know where the goal posts are, it’s much easier to score.