Can you fill this in?

Many people have thoughts that come to mind immediately, such as:

However, these are often beliefs that limit you. Each time you repeat them to yourself, you give your subconscious mind marching orders to make sure you are correct.

Principle #33 in Jack Canfield’s book “The Success Principles: How to Get from Where You Are to Where You Want to Be” is Transcend Your Limiting Beliefs. You can often recognize a limiting belief because it causes you to believe that something is impossible.

The Source of Limiting Beliefs

These limiting beliefs often come from our childhood. For example, your parents might have told you things such as:

If you heard these comments enough times from people that you loved and admired, it’s easy to embed them in your mind. However, if you’re willing to recognize that the beliefs may be false, you can replace them.

Replace I Can’t with I Can

One way to transcend these limiting beliefs is to simply eliminate “I can’t” from your vocabulary. Each time you find yourself saying “I can’t,” replace it with another phrase such as one of these. 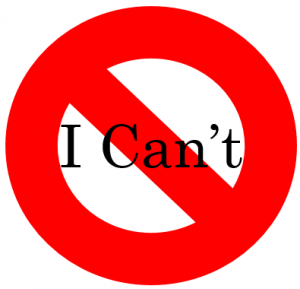 Some of the greatest achievements occurred because someone simply didn’t believe that inner voice (or external voices) that said “you can’t”.

I remember my first thought when I learned the price of my current home was “I can’t afford…” However, I quickly replaced it with “how can I afford that?” While this isn’t anything on the scale of breaking a world record, I’m very grateful I was able to replace “I can’t” and explore the available options.

We are often capable of much more. We’re capable of achieving more, loving and being loved more, receiving and giving more, learning more, and doing more. And even relaxing more. However, we often allow embedded beliefs to tell us we can’t. While there are many ways to transcend these limiting beliefs, one of the simplest is to eliminate the phrase “I can’t” from our vocabulary. 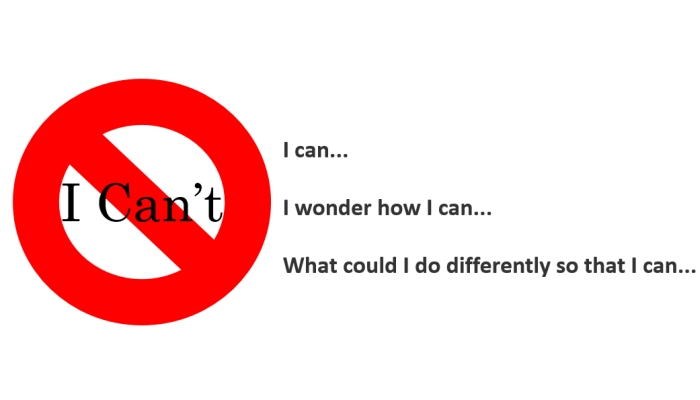 For another approach to release limited beliefs, check out this blog post: Trapped by your Mind? Learn This Five Step Process for Releasing Limiting Beliefs.