I’ve recently received a barrage of queries about RAID and Security+, so decided to write two posts to answer some of these questions to more people. This post covers RAID-6 and RAID-10. The previous post covers RAID-0, RAID-1, and RAID-5.

RAID-6 is an extension of RAID-5, and it includes an additional parity block.

A huge benefit is that the RAID-6 disk subsystem will continue to operate even if any two disk drives fail. RAID-6 requires a minimum of four disks. 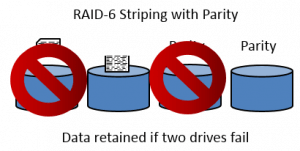 RAID-6 (striping with dual parity) provides fault tolerance and will continue to operate even if two drives fail. It provides an increase in read performance. However, because it needs to calculate and write parity on two separate drives, it is slower with writes. It requires a minimum of four disks. The equivalent of two drives are used for parity instead of data storage space.

A primary benefit of a RAID-10 is that provides high read and write performance. It is especially useful with online transaction processing (OLTP) databases, or any system that performs a high volume of small reads and writes.

Another benefit is that the RAID-10 disk subsystem will continue to operate even if a single disk in any mirror fails. 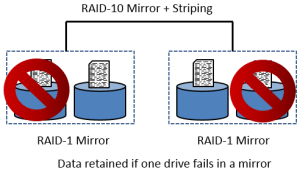 However, these two drives must must be in different mirrors. The data is lost if two drives in the same mirror fail. 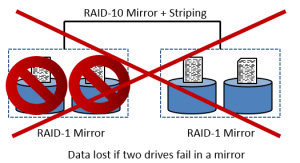 When adding disks to a RAID-10, you need to add disks in multiples of two. As an example, the following graphic shows how you add an additional mirror volume to a RAID-10.

This RAID-10 can continue to operate even if three drives fail (as long as the failed drives are not in the same mirror.

For example, if two drives fail in the mirror as shown in the following graphic, all data is lost.

RAID-10 (mirroring with striping) provides fault tolerance and will continue to operate even if multiple drives fail (as long as both drives in any given mirror don’t fail). It provides an increase in both read and write performance and is ideal for many database server applications. It requires a minimum of four disks. The equivalent of half of the drives are used for mirroring data, so they do not provide additional data storage space.

For example, a hardware RAID may include six physical disks using four in an active RAID-6 configuration and two as online spares. If one of the active disks in the RAID-6 fails, the RAID will continue to operate because a RAID-6 can tolerate the failure.

However, a hardware RAID can logically take the failed disk out of the configuration, add one of the online spares into the configuration, and rebuild the array. All of this happens without any administrator intervention. Hardware RAID systems are often hot swappable, allowing administrators to swap out the failed drive without powering the system down.