Principle #22 in Jack Canfield’s book “The Success Principles: How to Get from Where You Are to Where You Want to Be” is “Practice Persistence.” A quote by Norman Vincent Peale sums it up:

“It’s always too soon to quit.”

A common story is how someone is often so close to reaching the treasure of their life. 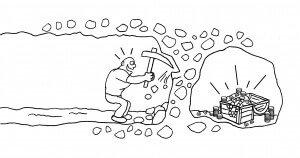 However, they get frustrated because they haven’t reached the goal. Within inches of success, they abandon the goal. 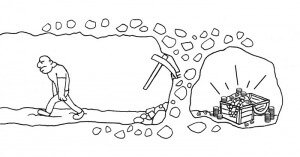 From a deeper perspective, I like the way John C. Maxwell talks about persistence in his book The 15 Invaluable Laws of Growth.

“Most people never realize how close they are to achieving significant things because they give up too soon. Everything worthwhile in life takes dedication and time. The people who grow and achieve the most are the ones who harness the power of patience and persistence.”

This week, a couple dozen people sent me emails telling me they passed the Security+ exam using the CompTIA Security+: Get Certified Get Ahead: SY0-401 Study Guide and/or study resources on this site.

One person let me know he failed saying things like “Stupid exam that is way too hard.” “The questions … are filled with junk.” and “Seems like to me Comptia likes making money.”

I wasn’t sure if he was just blaming and complaining, or asking for help. I decided to give him the benefit of the doubt and assume that he sent his email in a moment of frustration, but he actually wanted some feedback on what he could do differently to pass the exam. (Apparently, I was mistaken.)

After looking at his online account, I noticed a few things:

In my reply, I pointed these things out and gave some feedback on some things he could do to pass the exam. It requires persistence, but it is the same formula for success that has helped many people pass this exam.

His reply indicated the feedback was not desired. No worries though. It is a still a good example related to the principle of Practice Persistence.

Another user sent me this email, which is a great example of how persistence results in success.

“Took the sec plus test today and passed with an 871.
I historically did very well on your practices tests
(and by my arithmetic scored about the same percentage on the actual test.)”

His account showed that he used all the materials and his scores steadily improved. Before taking the test he had recorded a steady stream of passing scores on all the quizzes including the Test Your Readiness quiz.

Persistence and the Three P’s of Success

David Copperfield describes the three P’s of success as passion, preparation, and persistence.

You won’t be an expert right out of the gate. However, if you take the time to prepare, learn, and grow, you’ll get better and better. You’ll discover previously unknown talents. You’ll make mistakes and learn from them. You’ll learn what works. You’ll learn what doesn’t work.

Success in meaningful goals rarely comes with a single action. Instead, success comes by repeating small actions over and over until you reach the goal. Success comes through persistent action.

Here’s How Persistence Has Paid Off

Jack lists several examples of how persistence has paid off for some famous people. Here are a few from his book, along with some others.

“Most people give up just when they’re about to achieve success.
They quit on the one-yard line.
They give up at the last minute of the game,
one foot from a winning touchdown.”