Principle #14 in Jack Canfield’s book “The Success Principles: How to Get from Where You Are to Where You Want to Be” is “Just Lean Into It.” This reminded me of a great truth.

“You don’t have to get it perfect.

“You just have to get started”

In the Believe It’s Possible post (on Principle #4) I mentioned my goal to increase sales of my CompTIA Security+: Get Certified Get Ahead Study Guide from 25 copies a month to more than 1,000 books a month.

I didn’t know how I’d do so, but I knew it was possible. I decided to get started and I leaned into the goal. I kept the goal focused in my mind and I took action almost every day.

Just Lean Into It and the Path Will Appear

Whatever your goal or passion, if you just lean into it, you’ll find that opportunities will begin to open up.

Jack talks about Jana Stanfield in this chapter. Jana wanted to sing from as early as she could remember. Ultimately, she decided to lean into her dream and start pursuing it. She took some singing lessons, started doing some weekend gigs, and ultimately found herself in Nashville seeking what she thought was the ultimate dream – a recording contract.

She didn’t get the elusive recording contract, but a better path appeared.

After some deep soul searching, she realized that the recording contract wasn’t really what she wanted. Instead, she wanted to combine music, comedy, and storytelling to provide entertainment and motivation to others. She decided “Where two or more are gathered, I will bring my guitar” and she played and sang for the enjoyment out it.

Soon, people began asking her for her recordings. While she didn’t have a recording contract, it turns out that all her time in Nashville provided the perfect training for her. Looking back, she realized that she learned everything she needed to record her own material.

So she began recording and fulfilling the requests from others. I’ve seen her live and love her music – it it is lively, inspiring, and catchy. You can buy some of it here. She also hosts some amazing transformational travel trips as “volun-tours,” such as her recent “Bali-Laugh” trip to Bali. 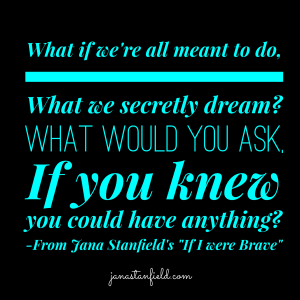 All of this opened up to Jana simply because she began learning into her dream of singing.

Just Start and Lean Into It

By starting and really leaning into your dreams and passions, your path will begin to open up to you, just as it opened up to Jana.

For example, you might want to work within info-security. However, that field is broad. By starting with a basic security certification such as Security+, you can gain a broad insight into the field and gain some insight into what your next path will be.

If you’re interested, here are some links that I sometimes give to people asking for career-advice: