Principle #30 is Face What Isn’t Working in Jack Canfield’s book “The Success Principles: How to Get from Where You Are to Where You Want to Be”.

It reminds me of something I learned a long time ago. Successful people develop the following three habits.

One of the first steps in facing what isn’t working is to pay attention to the alerts around you. These are all the subtle (and not so subtle) signals that tell you that something isn’t right.

Some people ignore the alerts though. As an example, the gcgapremium site sends an automated email about ten days after people sign up for a  Security+ package. It opens with:

“Are you getting close to taking your CompTIA certification exam?” and provides users with access to a free discount code to get 10 percent off their test voucher.

Here’s a response I received from someone recently.

> Failed it twice actually, the wording and stuff is BS. But third times
> the charm, next week.

I was curious so I peeked at his scores. Here’s what I found.

Interestingly, he took these quizzes all on one day about a week before he emailed me, and didn’t take them again since.

Based on this, I’m predicting fail number three. It’s like someone asking me “If I fail all of your practice tests, will I still be able to pass the live exam?”

Admittedly, the site doesn’t record all quiz scores, so he may have been studying other quizzes. However, I stress the following formula for success.

1) Consistently score greater than 90% on the following quizzes:

Most people follow both steps and pass the exam. As an example, here’s a snippet of a recent email I received:

“Thanks Darril, just wanted to pass on that I took your advice, took the online gcgapremium exams until I consistently scored in the 90s, and went from a 692 to an 811! All the best! Thanks,.”

How to Fail the Security+ Exam

Failing to Face What isn’t Working

Why would someone choose not to face what isn’t working? Jack puts his finger on it perfectly in the section “What Does Denial Look Like?” You don’t have to be a drug addict or an alcoholic to be in denial. Anyone can get caught up in it.

Why do people choose denial?

Using denial is often easier than it is to face what isn’t working. Here are a few denial phrases Jack lists in this chapter:

For me, many of these are familiar ways of avoiding confrontation. It allows people to postpone facing what isn’t working. However, the clear message is that postponing the confrontation doesn’t remove the problem. It just allows it to grow. 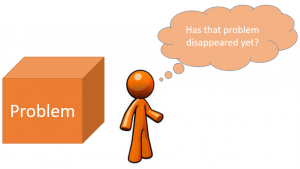 I’ve noted that people who repeatedly fail the Security+ exam often use denial phrases that blame things outside of themselves. The problem is CompTIA, the questions, the test center, solar flares, El Nino, La Nina, the gravity pull of Jupiter on Jupo, or something else.

Anything else besides themselves.

As long as they can deny that the problem is within themselves, they don’t have to change anything that they’re doing. They can go from failure to failure without examining themselves or their own abilities.

“Most men would rather deny a hard truth than face it.”