Chances are that you know someone that has breast cancer. Even if you and the other person don’t know it.

However, in this case ignorance is not bliss. What you and others don’t know can kill.

About six months ago, I knew someone that had breast cancer – Nimfa, my wife of 26 years. However, neither she nor I knew she had it.

Some time later a “routine” mammogram discovered an abnormality and a doctor ordered a biopsy. The biopsy was negative indicating no problem, but the experienced breast cancer doctor refused to believe it. He ordered another one and this one came back positive. Nimfa was now diagnosed with breast cancer.

Here’s something that women typically know, but men rarely do. A “routine” mammogram isn’t always routine for the women experiencing it. My wife has told me about how some techs roughly pull, tug, press, and compress the breasts to get them into the right position. It’s as if the tech forgets that there is a person attached to the breasts.

Of course, all the techs weren’t so rough, but because of some bad experiences, Nimfa was less than enthusiastic about going through this annually. However her healthcare team gave her regular reminders and she followed their advice.

Some medical organizations such as the Mayo Clinic recommend annual mammograms for women over 40, but there are other recommendations.

During the surgery, the doctor removed the lump and surrounding tissues. He also removed two sentinel lymph nodes for testing.

I think of the sentinel nodes as guards on the body’s primary highway leaving the breast and going to the rest of the body. If cancer spreads beyond the lump it must first pass through these guards and testing will show that these guards (the sentinel nodes) have been attacked. This helps doctors determine the best follow-on treatment.

Unfortunately, a technician in the lab destroyed these sentinel nodes instead of putting them through the testing process.

Medical technologies continue to advance by leaps and bounds. The Oncotype DX test can be done on the removed breast tissue and is appropriate in some situations. Nimfa’s surgeon ordered it for her.

It analyzes 21 genes and comes back with a score indicating the likelihood of breast cancer recurrence. This score helps doctors determine if chemotherapy would be beneficial, assuming that other standard therapies are followed.

Her doctors quoted a study published in The New England Journal of Medicine in July 2018 that provides a better guideline.  Specifically, it indicated that women with a score of 26 and above were more likely to benefit from chemotherapy.

After more tests and getting more information, Nimfa decided to pursue chemotherapy.

To prepare, she underwent surgery to install a Bard PowerPort device. This is a small device about the size of a thumb. It has an attached catheter that the surgeon threads though a blood vessel into a larger vein. This can be used for repeated injections, without repeated needle sticks into arm or leg veins. 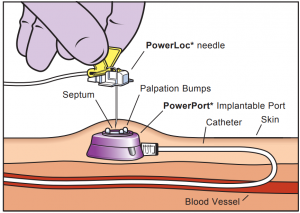 Nimfa starts chemotherapy on October 31 and will be receiving periodic treatments followed by recovery periods up until about January 2. We’ve received a lot of information on what might occur, but it includes some unknowns. My intention is simply to be with her as much as she desires.

This will be followed by daily radiation therapy for several weeks and then a pill for hormone therapy for the next five years.

October is Breast Cancer Awareness month and here are some quick facts I saw on a poster at the hospital.

The bottom line is that because this was detected in my wife early, her life is not in danger.

Admittedly, this has caused some stress for me (and her). However, I feel much better about it at this point and wanted to share a simple message with others.

Unfortunately, because mammograms aren’t always comfortable experiences, some women choose to avoid them. If you have loved ones in your life that are due to get this test, you might like to encourage them to get it. 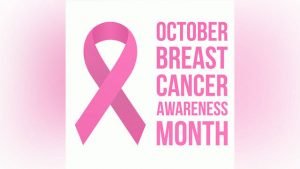