Successful people don’t try to do everything on their own. And when they need help, they don’t just ask friends and family. Instead, they seek out experts for guidance.

Very successful people create a network of mentors. Mentors are experienced and trusted advisers that provide guidance and knowledge to others. Often, mentors help people elevate their success to a whole new level. 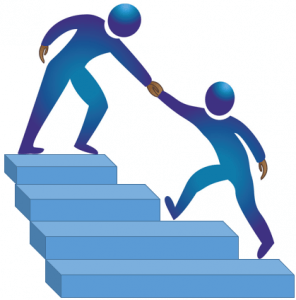 Principle #44 in Jack Canfield’s book “The Success Principles: How to Get from Where You Are to Where You Want to Be” is Create a Network of Mentors and Others Who Will Up-Level You.

Note that mentoring doesn’t have to happen one-on-one. As an example, I have spent very little time with Jack Canfield alone. However, he has been a great mentor to me over the years through his books, CDs, and seminars. Indeed, as I’ve been reviewing The Success Principles again this year, he has continued mentoring me.

I love the story about Jason Dorsey in this chapter. After listening to a local entrepreneur talk in his college business class, he was inspired to ask him to be his mentor. The entrepreneur agreed.

Jason eventually shared his life vision. It included working on the New York Stock Exchange, starting his own business, and retiring at 40. He then planned to work with hard-to-reach youth to help them get a good education and a respectable job.

The entrepreneur responded with some simple questions.

“Why wait twenty-five years to start doing what you really want to do? Why not start now? The longer you wait, the more difficult it might be for young people to relate to you.”

Jason thought that made sense, but he really didn’t know how to start. So he asked “How do you think I could best help people my own age if I started now?”

The simple advice was to write a book that people his age would want to read. He could share his secrets for feeling good about himself even when those around him were negative. He could say what it takes to ask someone to be a mentor. He could say why, at 18, he has so many job opportunities.

Three weeks later, Jason had the first draft of his first book “Graduate to Your Perfect Job.” After publishing it, he began speaking at schools and mentoring others. By the time he was 25, he had spoken to over 500,000 people. Over 1,500 schools began using his book as a course.

He’s since written two additional books. Jason Dorsey regularly speaks as a keynote speaker and has received over 1,000 standing ovations. He’s also been called the “research guru” by Adweek magazine for his extensive research on different generations.

But what if he didn’t respond to his inspiration during that business class?

What if he never asked that entrepreneur to be his mentor?

What if he didn’t listen to the advice and stayed on the path of his original vision?

It would be 19 years later and he would probably be running his startup so that he can retire in two or three years. Then, he could finally start doing what he really wanted to do.

An important point here is that when a mentor gives you advice, it’s important to listen and act on it just as Jason Dorsey did.

As an another example, a woman began asking me questions in April of this year about the Security+ and other certifications. She was always courteous and respectful, and asked a wide range of questions.

This past Thursday she sent me a note saying she passed with a score of 811. It was great news to hear.

In contrast, some people ask questions, but instead of acting on the advice, they just send more questions.

I’ve connected with another mentor recently: Jonathan Banammi, one of many outstanding instructors at CodingDojo. I’m signed up to the CodingDojo’s online Boot Camp and am looking forward to upgrading my programming skills and learning a couple of full developer stacks including Python and LAMP.

My ultimate goal is to be able to create a new online quiz app that can do everything that I want it to do and help more people Get Certified and Get Ahead.