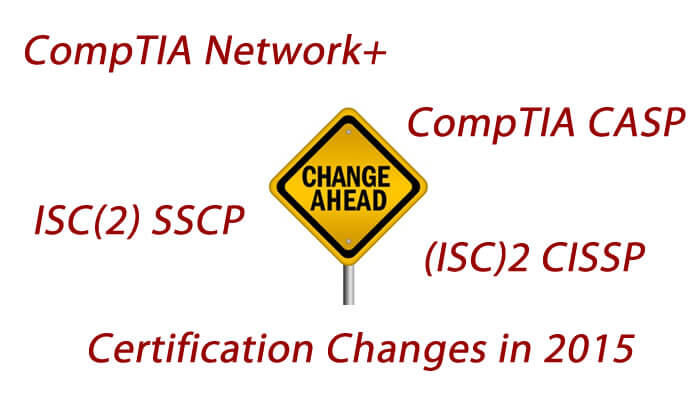 There are many different certification changes in 2015. Some you might know about, but others might be a surprise.

Here’s a summary of some of the changes:

While not announced officially yet, the N10-006 exam is on the horizon. It might be available in February or March of this year and it will replace the current N10-005 exam.

FAQ Should I wait for the new exam to come out before taking it?

Answer. No. Unless you want to delay your career.

Hiring managers don’t care which version of a cert you have. They only care if you have it.

Some of the key changes are:

The next version of the CompTIA Advanced Security Practitioner (CASP) exam (CAS-002) launched on January 20th. You can view the new objectives on CompTIAs site.

The CAS-002 exam now has five domains instead of four.

Note 1. Domain 2.0 was called Risk Mgmt, Policy/Procedure and Legal in the CAS-001 objectives.

The CompTIA Advanced Security Practitioner certification has been approved for inclusion in the U.S. Department of Defense’s Directive 8570.01-M.

Some of the key changes are:

(ISC)2 has been doing surveys and other activities indicating that they are updating these objectives. Unfortunately, they have not released the objectives to the public. It’s not clear if they are purposely keeping them private so that they can develop their own study guides ahead of other publishers, or if they just aren’t done yet.

The official (ISC)2 CISSP study guide has been periodically advertised on Amazon but the date keeps changing. Most recently, I saw a release date of March 3rd, 2015.

Shon Harris has written some excellent security books over the years. Sadly, she lost a battle with an illness in 2014 and passed away. Many of us are very grateful for all the energy she put into sharing her security knowledge and already miss her.

Update. Objectives were released in January and go live on April 15th. Check out this post for details.

Just as (ISC)2 has been updating CISSP objectives, they have also been working no updating the SSCP objectives. Similarly, they have not released any objectives to the public though.

For comparison, the current version of the objectives went live in February 2012 but were released to the public in July, 2011.

Both the (ISC)2 CISSP and SSCP certifications are accredited by the International Organization for Standardization (ISO) and the American National Standards Institute (ANSI) under ANSI/ISO 17024.

To remain eligible for this accreditation, the certifications must be updated regularly. Organizations typically update the certs every three years to ensure they remain compliant with ANSI/ISO 17024 requirements.

Update. Objectives were released in January and go live on April 15th. Check out this post for details.

4 thoughts on “Certification Changes in 2015”