Principle #4 in Jack Canfield’s “The Success Principles: How to Get from Where You Are to Where You Want to Be” book is “Believe it’s Possible.” In essence, it’s centered around this idea:

“Whatever the mind can conceive and believe, it can achieve.“

I’ve been learning from Jack Canfield (of Chicken Soup for the Soul fame) since 2008. Following Jack’s teachings, I’ve enjoyed many successes in my life including starting a career as a writer and authoring or co-authoring more than 40 books that have helped tens of thousands of people get certified and get ahead in their careers. I credit much of my success to applying principles that he teaches in my life. I decided to go through his book “The Success Principles: How to Get from Where You Are to Where You Want to Be” again, covering one principle a week. When inspired, I’ll create a post for the principle such as this one.

If you have a passion to do or be something, you need to believe it’s possible to achieve it. If you start off with the idea that it is impossible, you’ll quit at the first minor challenge.

However, challenges won’t stop you when you believe something is possible. Instead, you’ll look for ways to overcome any challenges knowing that there ares ways that you can overcome them.

Here’s an example of how I used this principle to dramatically increase sales of the the first edition of the CompTIA Security+: Get Certified Get Ahead Study Guide.

It was selling about 25 copies a month when I initially self-published it. In the publishing industry, many people refer to this as a dismal failure.

After some investigation, I learned that similar books were selling more than 1,000 books a month. If they could do it, why not my book too. I knew it would help people get certified and get ahead in their careers. I just needed to find a way to get it into people’s hands.

I set a breakthrough goal — a goal so big that some might call it outrageous or unrealistic.  Specifically, I set a goal of selling more than 1,000 books in a month. I didn’t know how, but if similar books could sell that many in a month, I knew that mine could too. In short, I believed it was possible.

That was in February of that year. I began practicing three common habits of successful people:

Admittedly, many of the new things I tried didn’t work. However, some did. In August of that year (just six months later), I exceeded my goal and sold more than 1,000 books that month.

“A belief is just a thought that you keep thinking.”

A key point is that I believed it was possible. And with that belief, I pursued my goal almost every day trying new things and repeating other practices that worked.

I could have just as easily decided it wasn’t possible and repeated that thought in my mind. If I did so though, I sincerely doubt I would have ever achieved the goal.

I earned my Master’s degree while stationed in Okinawa Japan and I met some awesome people. Many of their words stuck with me. As an example, one fellow student shared this advice she received from her grandmother. 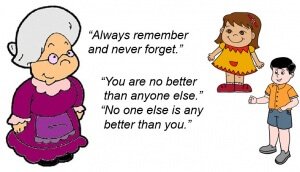 Even though she wasn’t my grandmother, I’ve found this advice to be very valuable.

The first part (“You are no better than anyone else”) helps me to keep my humility. I have some accomplishments, but anyone with passions similar to mine can gain the skills and knowledge I have and achieve the same things. I am no better than you.

If you have a passion to do something, you have the ability to do it too. Start by believing it is possible.

“You’re not given a dream unless you have the capacity to fulfill it.”