What do you want to do before you die? Have you ever given it any thought?

While vacationing in Alaska, my wife and I attended an awesome boat tour out of Seward Alaska with Kenai Fjords Tours. We saw otters holding hands in several different pods, seals sunning on an outcropping (and pushing each other around for a better position), several coveys of ptarmigan, eagles, a whale, dolphins bow riding with the boat, and much more.

And as memorable as the tour was, there was something else that stuck with me.

Strategically placed by the public restrooms (that I’m sure often have a line in front of them) was this huge chalkboard. The words are simple:

Before I die I want to

And then there’s space for people to write what they want. 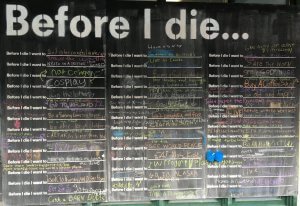 They may not be easy to read, so I’ve listed some of them here (even though I don’t fully understand them all):

There wasn’t any chalk when we got there. However, the shop owner with the big “Film Sold Here” sign (no, they don’t sell film anymore, but she said it’s just easier to keep the sign up) told me where I could buy some. I wrote mine and when we were leaving, I saw several other people writing theirs too.

How about you? What would you write on the wall if you had the chance?

The Before I Die Project

Candy Chang did the first Before I Die project in New Orleans after losing someone she loved. It helped her channel her grief and depression. Overall the project “invites people to contemplate death, reflect on life, and share their personal aspirations.”

Since then, similar walls have sprung up all over the United States. Some cities that have a wall are: Reno NV, Boston MA, Tonawanda NY, Toledo OH, Sacramento CA, Richmond CA, Louisville KY, Charlotte NC, Lake Worth FL, Albuquerque NM, Nashville TN, and Austin TX.

I wholeheartedly agree with one note on the Charlotte NC board “live in a world that loves all people.”

I liked this one on the France board “have my cat show me some respect.”

How About Your City?

Is there one of these where you live?

I did a quick search and see that there’s one in Portsmouth, VA (or at least there used to be one right next to The Bier Garden). I’m going to look for it the next time I’m in Portsmouth.

However, I don’t see anything about one in Virginia Beach, Norfolk, Chesapeake, or Hampton.

It may be something worth pursuing.

Will This Certification Get Me A Job?