Principle #12 in Jack Canfield’s book “The Success Principles: How to Get from Where You Are to Where You Want to Be” is “Act As If.” You can think of this as a combination of affirmations and visualizations on steroids.

As an example, when I attended a Breakthrough To Success seminar in 2012, we had a Come As You’ll Be party on the last night. Each of us thought of where we wanted to be five years from that night and for about 30 minutes or so, we took on the persona of that person in the future.

Some people were best-selling authors, others had pictures of their dream homes, one was a movie star, several people were coaches or trainers, and many were successful entrepreneurs in a wide variety of businesses. It was a lot of fun and very memorable.

Looking back, I recognize that one of the biggest reasons that this Come As You’ll Be party was so memorable, even four years later, is because we engaged all of our senses. We truly felt the excitement and enjoyment of living that life of our dreams. Sure, part of it was make-believe, but another part of it gave our minds and souls a sense of what was possible.

Act As If in Daily Life

While it isn’t feasible to live in a Come As You’ll Be party all the time, it is possible to act as if you are living in the role you desire.

As an example, I ran into a guy that wanted to become a radio or TV announcer in the unlikeliest of places – a fast-food drive-through line. I had previously heard a person at the same place with his voice so muffled that he sounded like he was talking through a clown hat.

Not this guy though. He spoke so distinctly with a clear booming voice that he almost seemed out of place. When I got to the window I said “You must be practicing for your next job.” He grinned and said “Yes. I’m going to do voice-overs and become a radio or TV announcer.” I never saw him again, but wouldn’t be surprised if that is exactly what he is doing now. 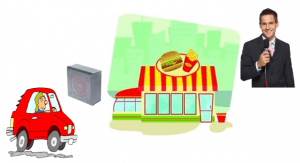 Act As If – Writer’s Write

Many people ask me how they can break into writing and my simple answer is “writer’s write.” If you want to become a writer, start writing. Now.

The simplest way to do so is to start a blog. Identify your ideal reader (even if that’s you) and write your posts for that person. However, act as if thousands of people (or more) are reading your posts every day.

Many people have written enough blog posts that they’re able to compile them into a book, even when that wasn’t their original intention.

Act As If Action

Whatever you have as a vision or goal for yourself, you can begin to act as if you are living it now.

If you want to become a successful IT security professional, start acting like one now in everything you do. One simple step you can take is to look at your communication methods. Consider some of the emails in the “What Does Your Communication Say About You?” blog post and ask yourself how the most successful IT security professional would communicate to others.