When you are 100% committed to something, it becomes significantly easier than if you are only 99% committed to it. You rarely have to make any decisions whether you will pursue it or not. You just do.

For example, imagine that you commit to taking and passing a certification exam (such as the Security+ exam) on a certain date. You recognize that in order to do so you need to study a certain amount of time, and you decide to study at least two hours every evening. This becomes your 100% commitment.

If you are truly 100% committed, this is not a temptation at all. You briefly evaluate the options, recognize your commitment and stick to it.

Principle #35 in Jack Canfield’s book “The Success Principles: How to Get from Where You Are to Where You Want to Be” is 99% is a Bitch: 100% is a Breeze. The 1% can make a world of difference. Imagine if the airlines sought only 99.9% safety – that would result in two unsafe landings at O’Hare International Airport (saying nothing of all the other airports in the world).

In contrast, imagine that you are only 99% committed. Each temptation can steal your energy and focus if you spend time debating whether or not you’ll succumb to the temptation. All sorts of scenarios can start running through your mind. Maybe I can make it up tomorrow. Maybe skipping a day is OK. Maybe the exam won’t be that hard. Maybe I can sleep with the book under my pillow.

Along those lines, it’s worth it to take your time before making a commitment. In short, don’t make promises to yourself that you can’t keep.

My wife and I recently enjoyed a jet boat tour up the Susitna river in Alaska. One of the highlights was a view of a few hundred spawning salmon waiting their turn to jump up a waterfall. It was an awesome sight. 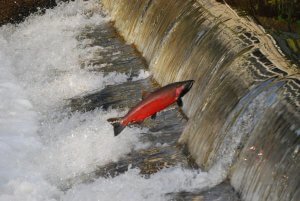 While many of the jumps were quite challenging for these fish, they persisted. Their goal was clear and nothing was going to stop them from reaching it. Each of them was 100% committed to reaching their goal. When they came to a challenging jump, they didn’t question their commitment. They didn’t spend time debating whether they would continue. They didn’t look for excuses. They didn’t blame the rocks or the current. They just continued.

100% is a Breeze When The Alarm Rings

Martin Buser has run the Iditarod 33 times and came in first place four times. He says he typically runs with the dogs for about five to seven hours and then he takes a break for about five to seven hours. However, the break is mostly for his dogs. He spends the majority of time feeding them, tending to them, rubbing and checking their feet, changing their booties, and throwing down hay for them to sleep. At some point, he eats and sleeps, sometimes getting only about 45 minutes of sleep.

“I know exactly where my limits are;
I step over them every day.”

When the alarm goes off, he says he has to make a decision. Does he get up or sleep more? (He doesn’t have a snooze alarm.) However, the decision is clear. He’s in the race to finish it and do the best he can. He gets up, gets his dogs ready, and soon starts mushing again.

Imagine a racer that wasn’t in the race to finish it, but merely wanted to start and participate.  As the bitter cold (as low as 60 below) and blowing snow becomes intense, it can easily create a distracting conversation in his (or her) head. Without a 100% commitment, he can start asking himself “Do I really want to do this?”

The difference between 99% and 100% might seem small, but as you pursue any worthwhile goal, it can mean the difference between success and failure. That 1% can create mini-debates in your mind. It can steal your focus, energy, and enthusiasm. However, with a 100% commitment, your decisions are easy. In many scenarios, a 100% commitment is a breeze.